As I flew from London to Moscow, then Moscow to Tokyo, people in Wuhan were dying.  The new Coronavirus was spreading, and the pandemic was unimaginable to me. Everywhere people were wearing masks, unsure of how to avoid the threat. The next leg of my unprecedented journey was New Zealand.

My journey to New Zealand was punctuated with concerns surrounding the virus, it is a difficult time, a result of widespread disrespect of the ecosystem and made me appreciate the unspoilt beauty of New Zealand even more keenly.

We stayed in a batch on Orua beach, New Zealand, where the natural world and people seemed to exist in a balance which favoured the world. Along the beach, I saw mudflats, water running over sand taking soil in trails, which looked like many, miniature river deltas observed from space. Lush vegetation was profuse right up to the shoreline, where crabs scuttled noisily amid the rocks.

We saw the multicoloured bare rock, weathered outcrops, and fallen trees on beaches which had been colonised by shellfish. The mussels which encrusted the bleached timber were so extensive and tightly packed together that they looked like a garment, fitted to the tree like a new bark. The texture was rough yet smooth, and this living blue-black crust was utterly captivating.

Bird life and marine life are cherished, respected and thrive everywhere. The next morning, I saw the sunrise over the bay, the natural world filled my senses and was splendid.

Awhitu beach has black sand and white surf, both sparkling brilliantly in the bright clean sunlight. The contrast was powerful, dramatic, disorientating and dazzling.

Tiritiri Matangi Island is a nature reserve near Auckland, a marine and bird paradise. Instructions are clear about taking great care not to inadvertently take creatures or soil or seeds there which might affect the ecosystem.

Before you board the boat, we were asked to check our shoes and our bags for possible stowaways. This is a good illustration of how much New Zealanders care about preservation of their wildlife. They really appreciate what they have and ask you to respect their rich and precious natural wealth.

I saw a beach of broken pink seashells there, being polished by the sea. They were possibly pink clamshells, slightly iridescent, the nacre part worn away. I wondered who had eaten the clams, and we swam in the warm ocean, listening to the corners of the fragments worn smooth by the rhythmic tide.

Back home I discovered that one Maori symbol for a shell was a triangle, and it reminded me of the polygon remnants tumbling up and down the beach. I also discovered how iridescence is possible, and how the surface is formed in layers which build up in hexagonal platelets of aragonite and overlap. Nacre appears iridescent because the thickness of the aragonite platelets is close to the wavelength of visible light. As light bounces back to our eyes we see a spectrum of colours.

Auckland art gallery had many wonderful artworks, including a great show by an artist called Louise Henderson (1902- 1994). Her paintings, especially a series called ‘Elements, Air and Water’ were notable for the energy of her brushstrokes and colour palette, capturing the quality of perceptible light and colours I had experienced in New Zealand so exactly, it was as if they were finely tuned to my trip so far. Her work was an influence on my paintings about Goat Island:

There are several islands called ‘Goat Island’ around New Zealand, so named because explorers left a goat or 2 in case they were shipwrecked and needed food. Goats do not need fresh water; they obtain the moisture they need from their food. We took a glass-bottomed boat trip around a marine reserve of one Goat Island and was mesmerised by the flashing, silvery fish, the vibrant underwater vegetation, and dreamy shades of intense blue and aqua green.

Brickbay sculpture trail is also a vineyard with a lovely restaurant. The work was a cohesive selection of exciting New Zealand artists. Highlights for me included Virginia King’s floating sculpture, La Luna, a ring of orbs arranged in a perfect clearing of lily pads in a lake.

Whilst we observed we enjoyed an audio work by Sam Hamilton called the Sex Choir, which was sung by a choir to reflect the mating calls of frogs.  Chiara Corbelletto’s suspended sculptures amid the nikau forest was elusive and fascinating. Gregor Kregar’s bronze and Corten works, were fun and vibrant, and I loved the trail of bronze bells by Tiffany Singh. Mary-Louise Browne’s stone steps with carved letters, Jeff Thompson’s corrugated iron boat and John Reynold’s signs were all brilliant too.

The Vivian is a contemporary art gallery in Big Omaha. I saw Rebecca Wallis’s work here, large wall pieces in what looked like acrylic and resin, some with aluminium leaf. The colours were pastel pink, grey and white and reminded me of the pink seashell beach we had experienced in Tiritiri Matangi. I saw enormous strung beads both here, in Auckland art gallery and at Titirangi art gallery and they subconsciously influenced the Vermeer I made about the bronze Buddha I saw in the Tokyo National Museum.

Tokyo and Auckland could not be more different! My experiences have changed the way I think, made me appreciate culture and the natural world even more, and I am in the process of translating some of my responses into a series of panels to be shown when we are somewhat recovered from the current crisis situation.

Copyedited and Search Engine Optimised by Lilia Bird on 11/07/2021.

Together We Rise at Chichester Cathedral is open!

Together We Rise comprises over 30 artworks by Royal Society of Sculptors members, presented within Chichester...

No Woman is an Island 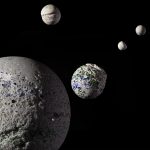 The Product of the Pandemic: Glass GlobesPREV 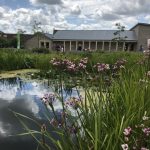